The Wolfram Physics project is exciting on its own merits, but in addition to being a candidate theory of everything, it seems like it could also help explain the hard problem of consciousness, which would make us two for three!

But first, let’s back up a little.

Donald Hoffman is a cognitive psychologist at UC, Irvine and known for two related theories:

It’s conscious realism in particular that has an intriguing similarity with the Wolfram Physics Project (WPP).1 As a refresher, the fundamental building block of WPP is a “a collection of abstract relations between abstract elements”; basically, a set of rules that operates on a current state to generate a new state. The WPP announcement uses this example rule to illustrate the principle:

Well, this seems very similar to the Conscious Realism model for conscious agents: 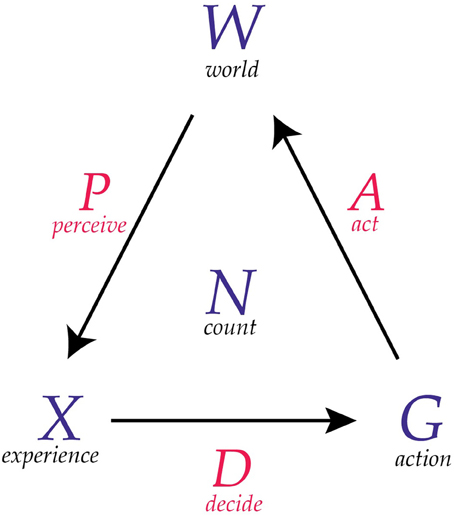 Presumably, an actual mathematician could perform a slightly more rigorous equivalence proof, but if Hoffman’s conscious agent model is a WPP-compatible ruleset, then starting only with Hoffman’s Hypothesis 1, “the world W consists entirely of conscious agents”, we’d have a solution to the hard problem of consciousness2 from which both general relativity and quantum physics would emerge.