The perfect Father’s Day gift for this stay-at-home year has been an Ooni pizza oven.

It conveniently hooks up to the natural gas line for the grill, so I never have to worry about exchanging propane tanks, and it gets blazing hot.

I use the classic pizza dough recipe from the Ooni app, scaled here for a 200 g dough ball, which is perfect for a single pizza. (I typically make dough for 4–5 pizzas.)

I use weights not measures for multiple reasons: it’s more accurate, it’s easier to weigh ingredients than to properly measure, and it’s easier to scale whole numbers than fractions (English-units, amirite?).

The pizzas cook quickly, but I find the dough can tend to stick if it’s formed and left to sit too long, so if I don’t have enough help to keep an assembly line going I tend to make them one-by-one. This also gives the oven temperature time to recover between bakes.

I start with a thin layer of sauce, then cheese, then any toppings. We’ve used everything from sliced buffalo mozzarela to pre-grated “pizza cheese”. It was all pretty good. For toppings we’ve tried pepperoni (natch), sausgage (pre-cook it), procuitto, pineapple, mushrooms (slice thin), olives, and more. It’s pretty hard to mess this step up other than by overloading things. This is a plain cheese, with sliced mozzarela, on a well-dusted peel, with an olive-oil brushed and salted edge. 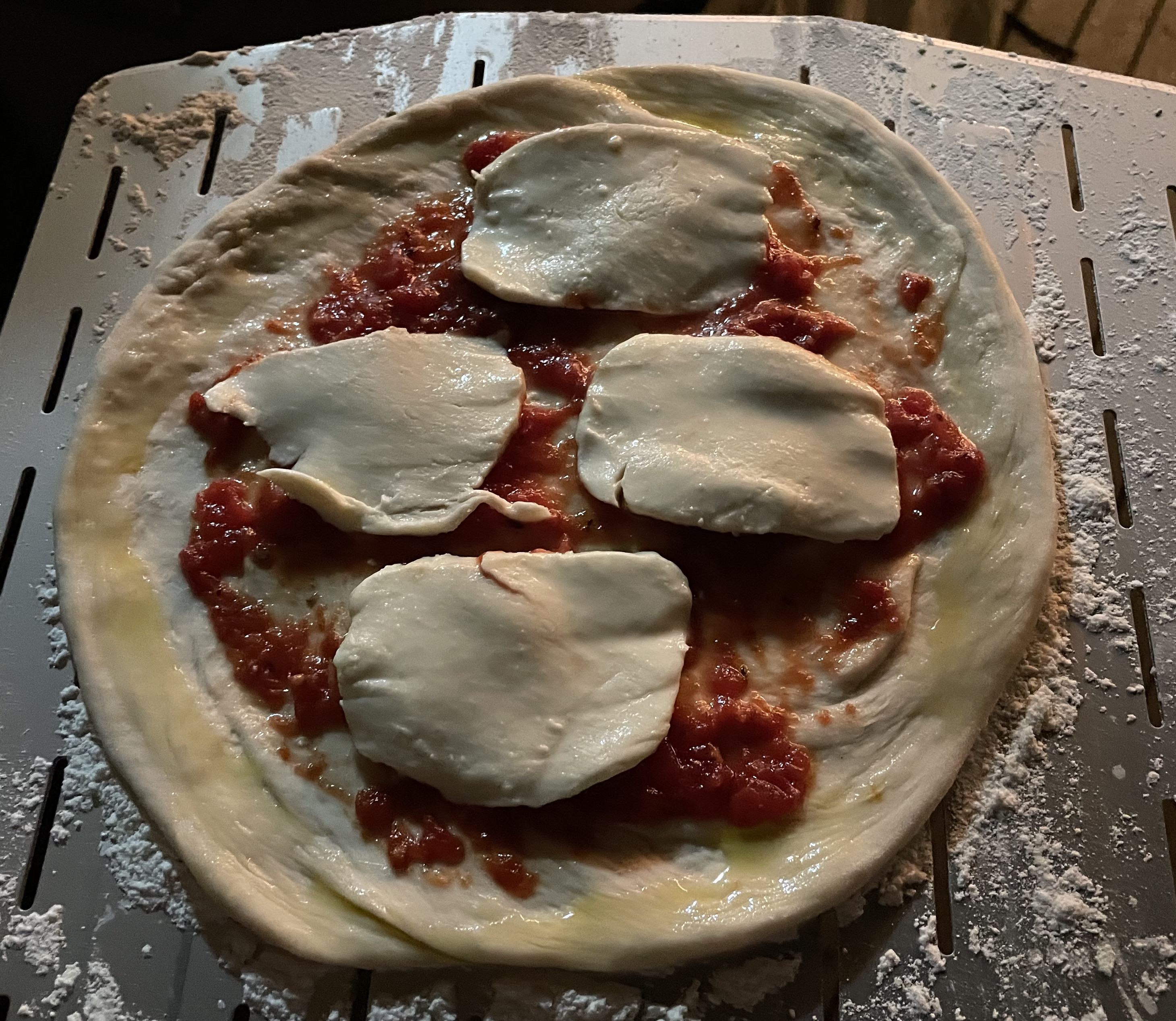 I typically get the oven going just before I start forming the first pizza, to give it at least 10-minutes to warm up. I want the baking stone to be around 450°C (775°F). Then just before I slide the pizza in I turn it down to medium. This keeps the crust and cheese from burning in the radiant heat while the stone cooks and browns the crust from below. 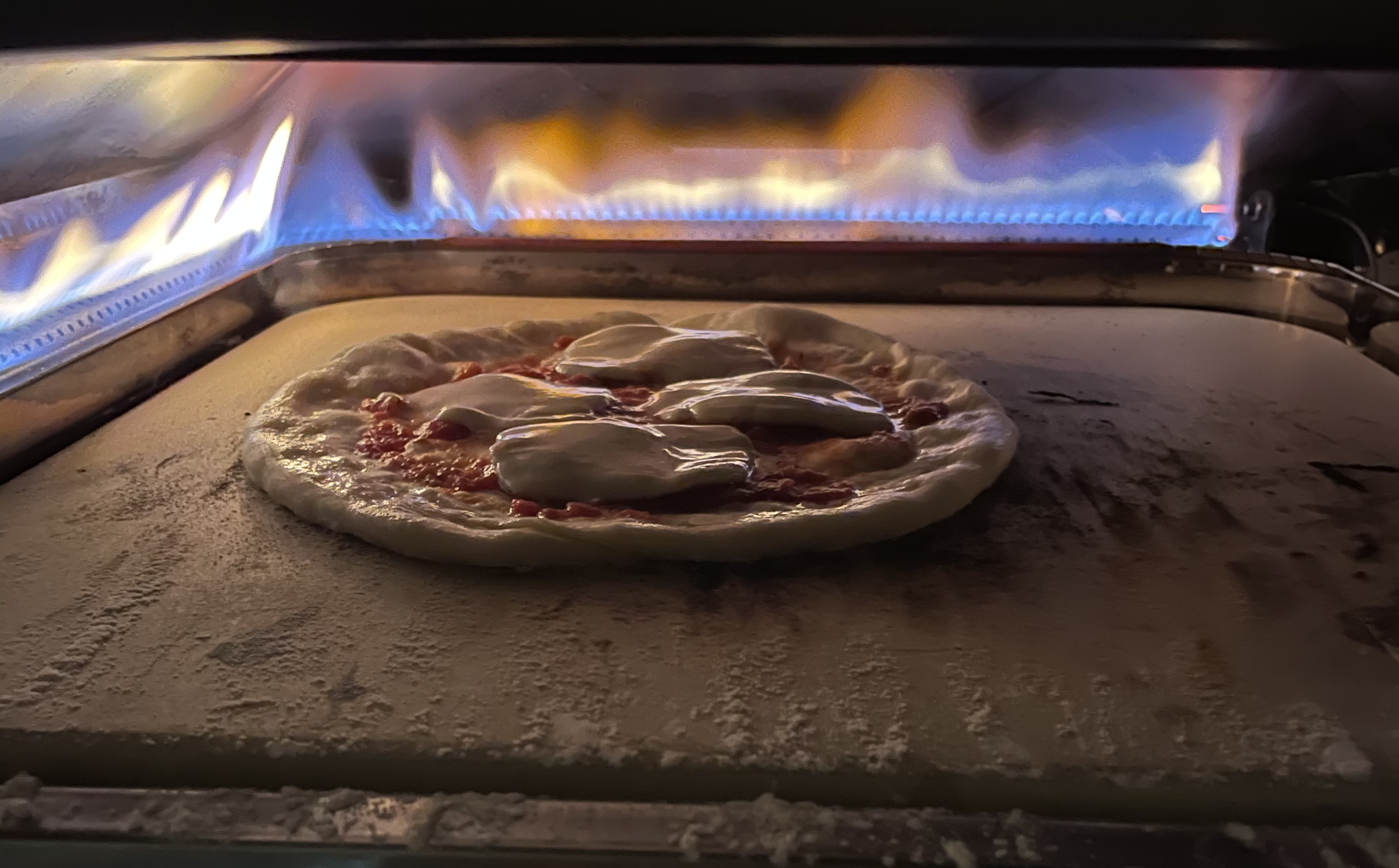 I usually give the pizza 30-40 seconds before I start to rotate it, a quarter-turn at a time, using a pair of long tongs. It’s usually completely done cooking in just under two minutes.

I pull the pizza out and turn the oven back up to high so it can recover while I take the pizza inside to cool and slice and make or fetch another.

Using the peel takes a bit of practice but the keys are using enough flour so nothing sticks and being fluid and confident in the jerking motion that slides the pizza off into the oven or that pushes the peel under a finished pizza.

The results are delicious. 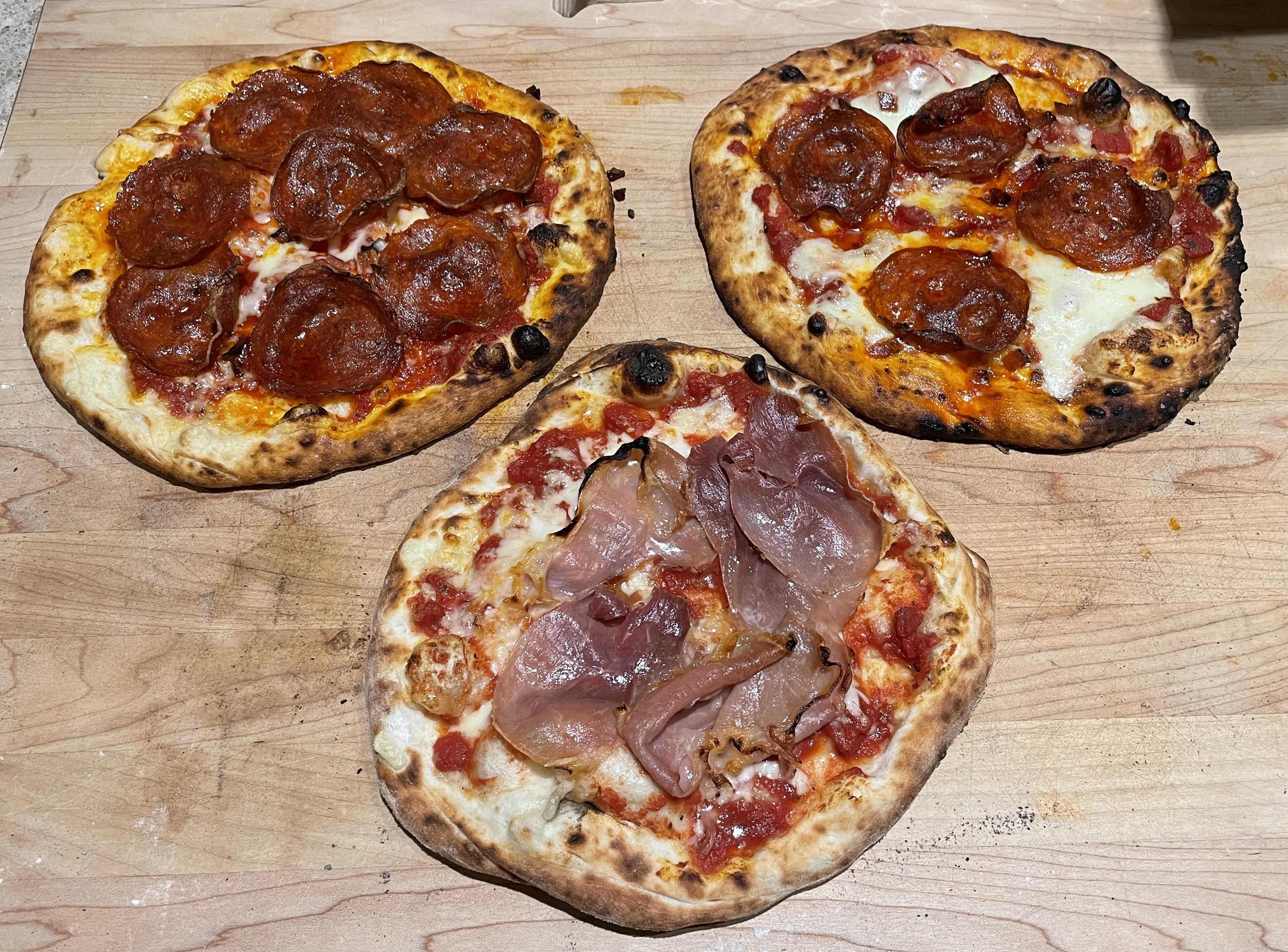