Most of my family’s TV watching is streaming Netflix or iTunes (thanks Gigabit internet), and the only things we watched on cable were Seahawks games and a little network TV.1 It was time to cut the cord.

Unfortunately, the NFL hamstrings Game Pass in the US by not showing live games. I know it can be tricked using a VPN, but I’d prefer a solution that was technically legal; plus, VPN feels like asking for a game of cat-and-mouse.

Luckily I live in Seattle, which means all Hawks games2 are broadcast on local affiliates (typically Fox, but NBC for Sunday night, and occasionally CBS for AFC opponents). So if I could find a way to record broadcast TV then I could cancel my cable without giving up anything.

Tablo was my answer. It’s an over-the-air (OTA) tuner and DVR. You hook it up to an antenna and a hard-drive, and it records live TV for watching later. Its AppleTV, iOS, and web apps are great. It has a well-designed programming guide and an intuitive interface to browse recordings. There’s even a way to stream what you’ve recorded over the internet, so we can watch games if one of us is on travel.

The Tablo uses an external hard-drive to store recordings. They recommend several, but I picked a 5 TB version because it was only $30 more than the cheapest option.

The last step was finding an antenna. My house is within five miles of the relevant broadcast antennas, but it’s in a little bit of a valley, so this part was the trickest.

I started with a Mohu Leaf 50, but couldn’t get a reliable signal. I didn’t want to keep experimenting, so I jumped to the badest-ass looking one I could find: the ClearStream 4 Indoor/Outdoor HDTV Antenna - 70 Mile Range. 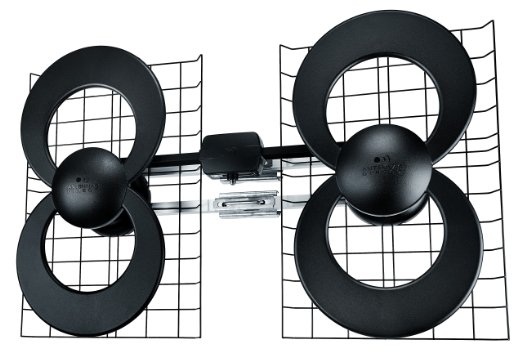 I dabble in antenna issues at work, so I appreciate its form, but aesthetically it’s pretty heinous. Luckily I have an attic, so that’s where I mounted it. Getting the antenna higher up was probably just as important as getting an antenna with better performance.3 I ran the coax straight down to a high shelf in the closet, where the Tablo and the HDD live.

That was pretty much it. The Tablo walked me through the details of connecting itself to the network and scanning for channels. I’ve used it through the first week of the NFL season, and everything works great. The UI is unsurprisingly better than my old cable box, and being able to use the AppleTV means no more switching inputs on the amp.

Overall the hardware was several hundred dollars, but it’s a one-time up-front cost that will pay for itself by the end of the football season.