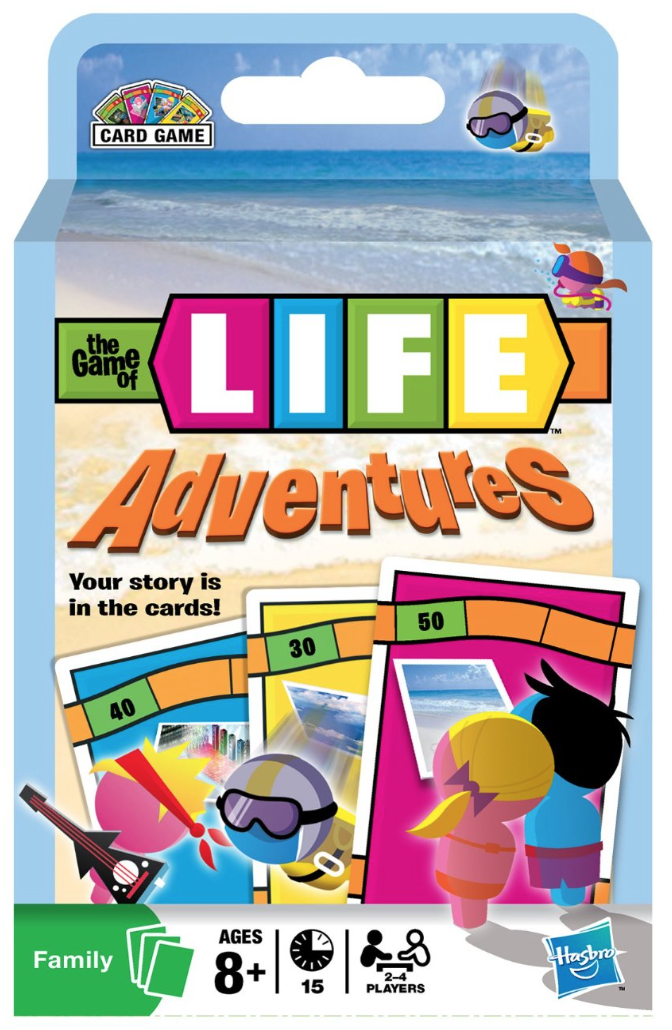 In contrast to the brilliance of Mille Bornes, The Game of Life Adventures is a case-study in crappy design. Like in Mille Bornes, people take turns playing cards from their hand for points. Tell me, what should I play out of this hand? Hint: I have no idea either, and it’s not because the strategy is so nuanced. 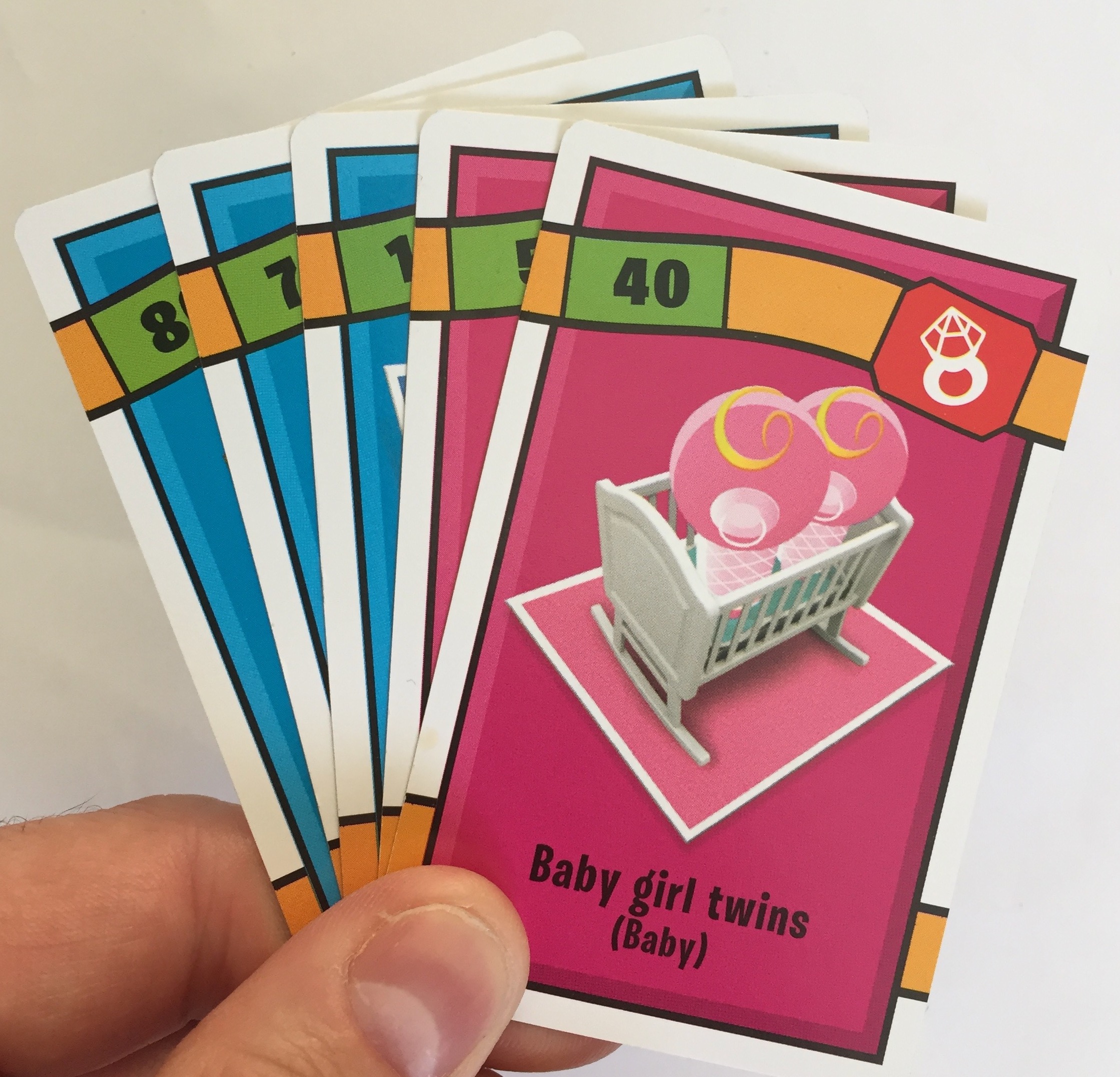 We’re mutually befuddled because, to first order, you only need to know two things about each card: how many points its worth, and if the card has a restriction.

For example: Baby girl twins is worth 40 points, and 💍 is a restriction. In this case, it means you cannot have children unless you’re married.1 Sadly, neither piece of information is actually visible when holding the cards in your hand, as it is in Mille Bornes. 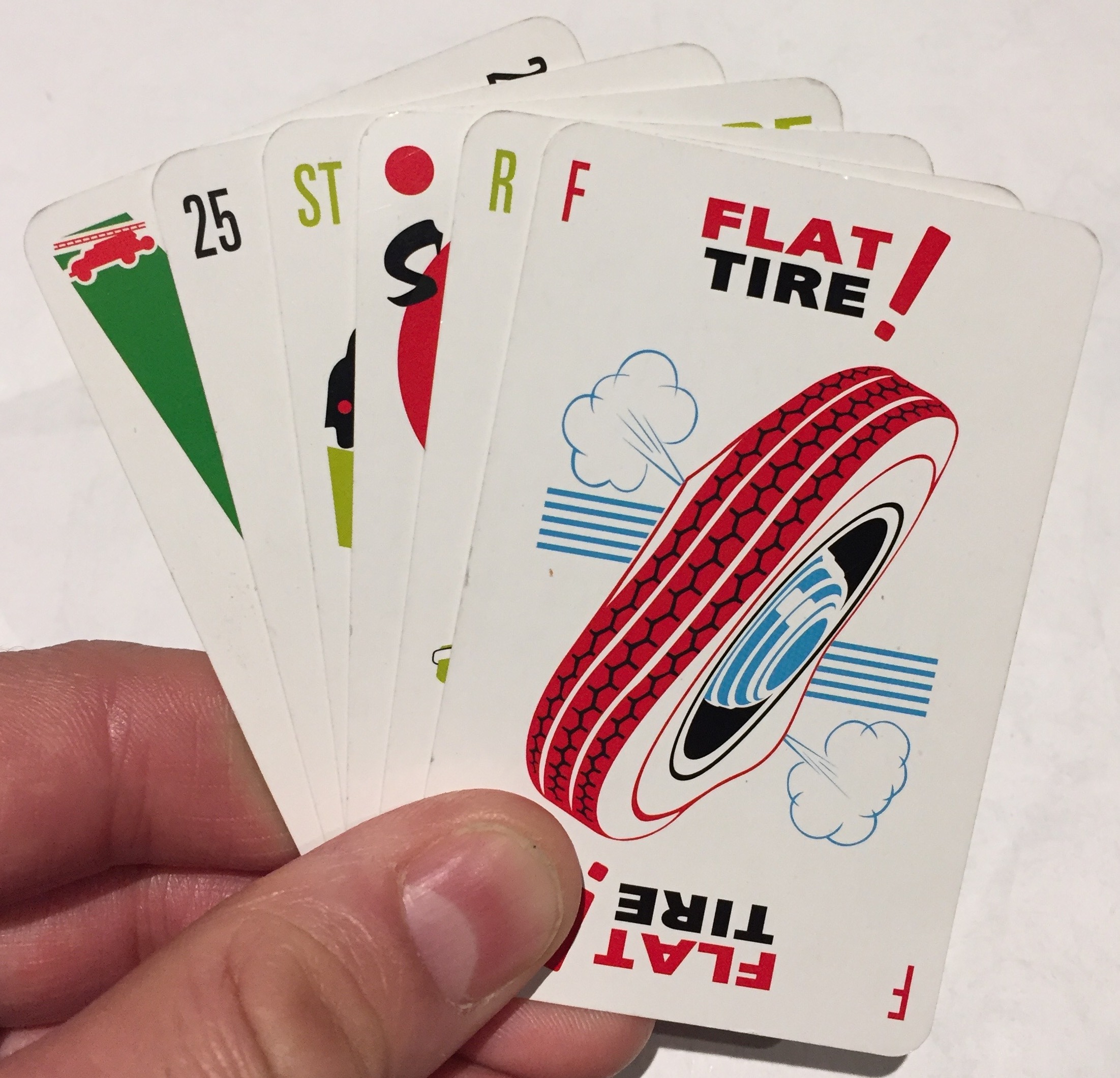 Life Adventures has at least a dozen different categories of restriction, but they aren’t listed in the rules, nor are they self-evident from the cards. All baby cards use the 💍 to represent a marriage restriction, but here are all the marriage cards in the game. Not a 💍 to be seen on any of them, much less when fanned. 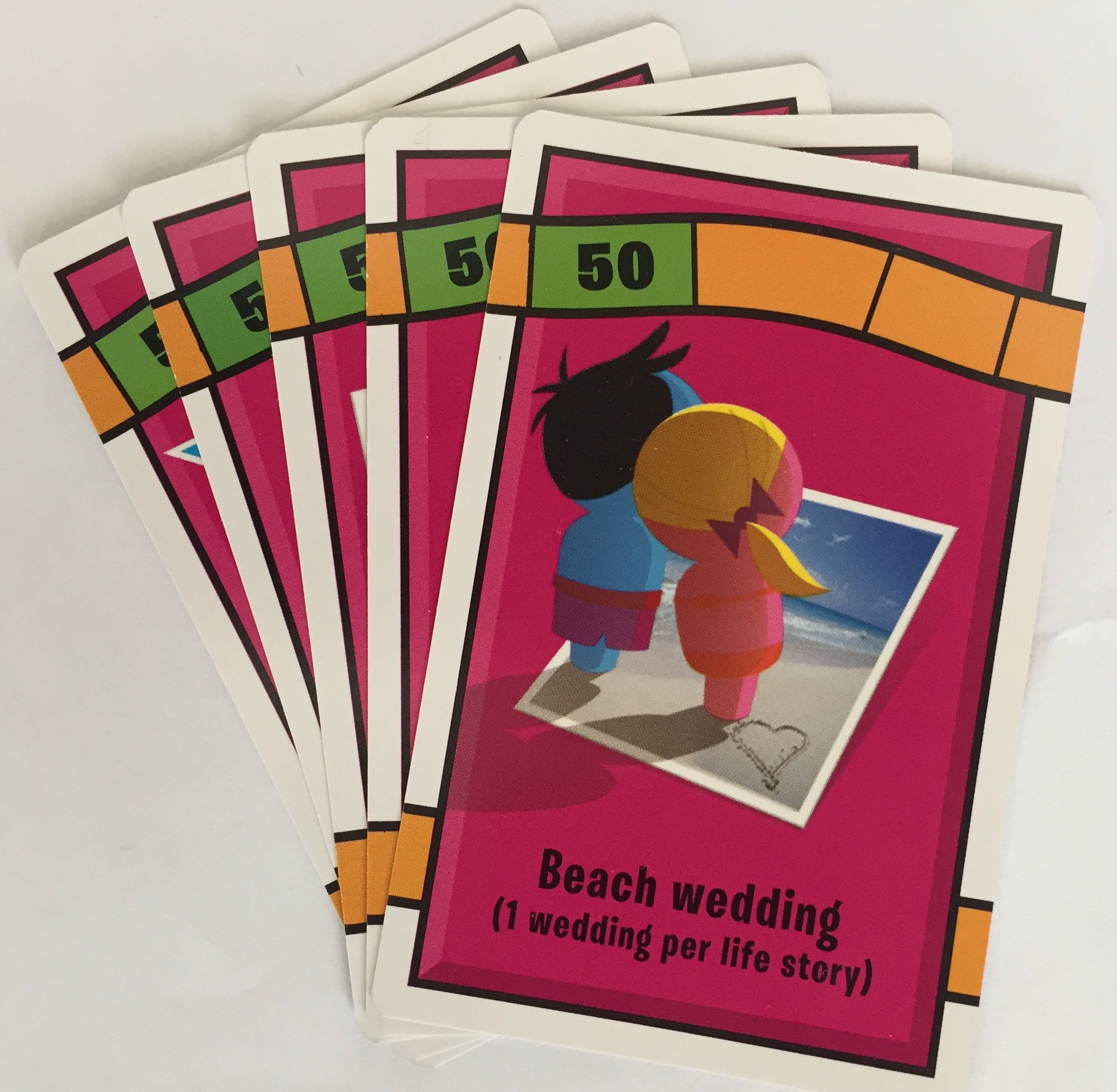 Even worse, the icon isn’t defined in the rulebook either. That’s right, you have to presume the meaning of the icon from context alone, and then during the game read the text of all your revealed cards to confirm that you’ve played the appropriate predecessor. Here are four more pairs of restricted cards and their predecessors. No 🏠 on the house cards, 🚗 on the car cards, 🗞️ on the degree cards,2 and no booklet of atomic energy facts ⚛️ on the passport cards. 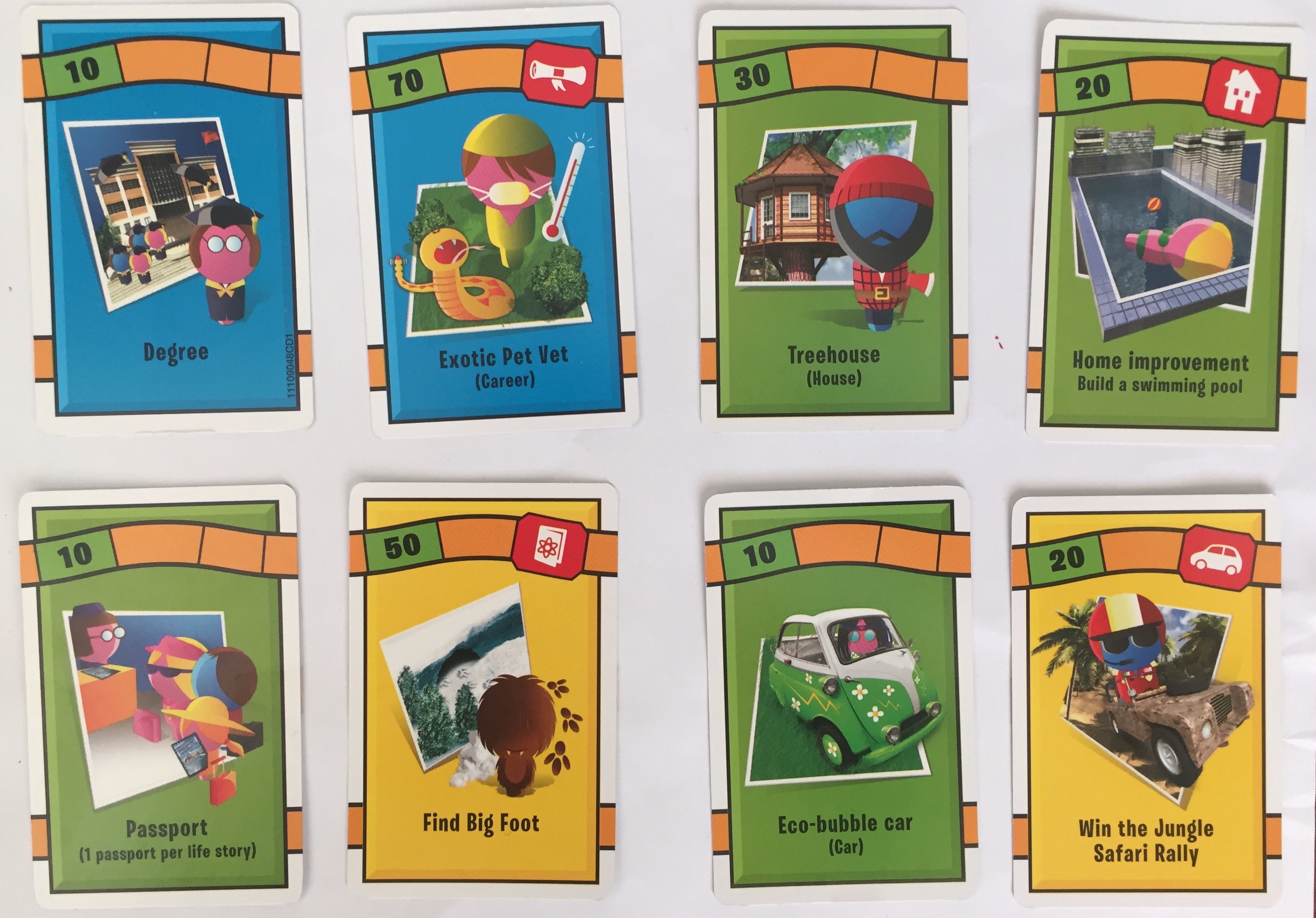 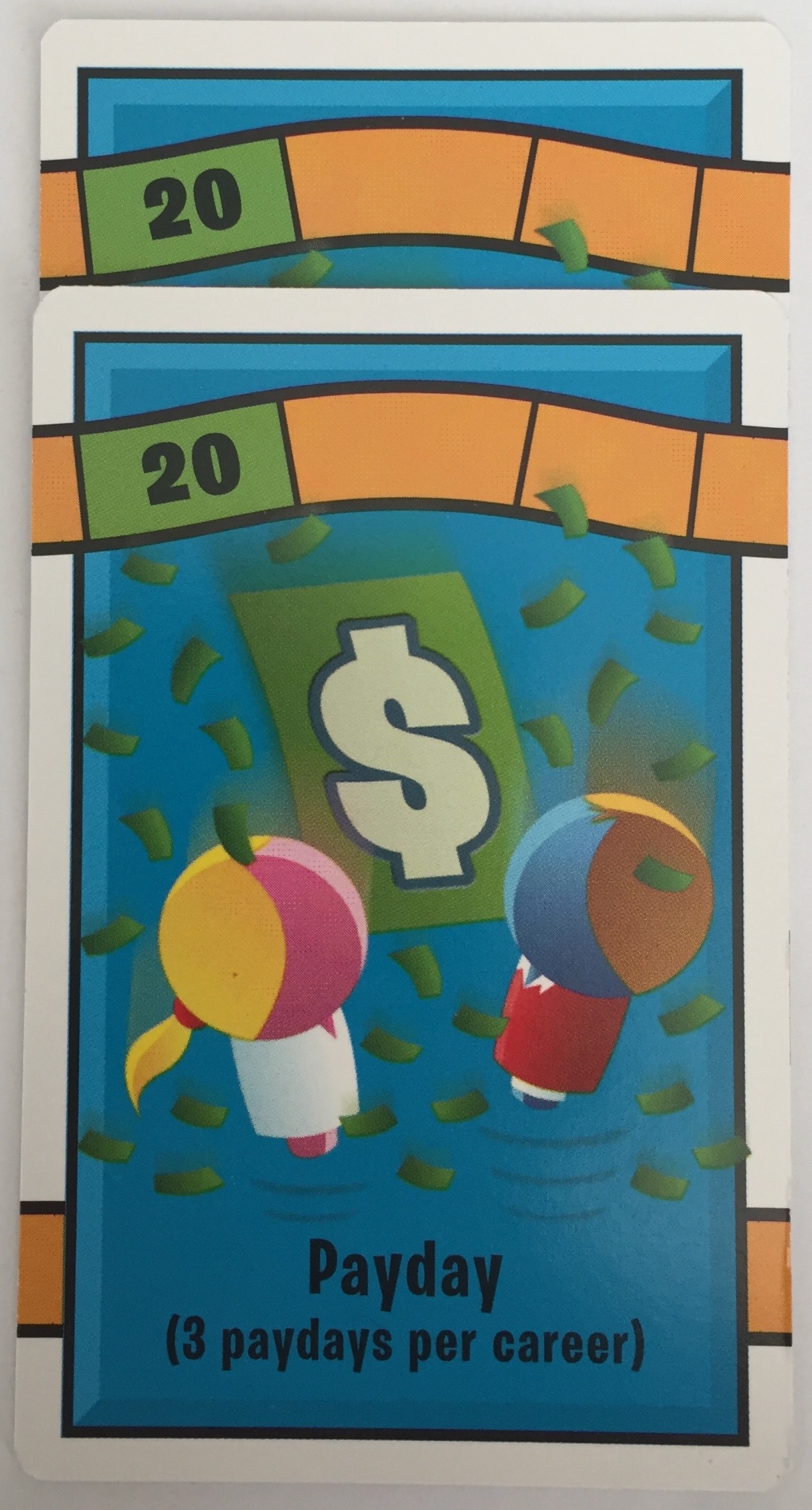 Some types of cards, like weddings or passports, can only be played once per game. Thankfully the rule is printed on the card, but both the rule and the card type is hidden once the card is played on the table because cards have to be stacked or they take up a ton of space. So if you can’t remember if you’ve previously played a passport you have to rifle through every played card. The play-thrice Payday card suffers from the same problem.3

Lastly, some observations on the type of card that lets you swap “life stories” with other players.

Let’s put aside for a minute whether it’s good family fun to steal another player’s house — to say nothing of their wedding or first-born child. The rules also don’t clarify pesky details like if an un-married player can steal said child. Or of more practical concern, these instructions from the left-most card:

Without looking first, both take 2 cards from your hand and swap with each other.

Without looking at my hand? The one that’s facing me as I pull this card from it and that I’ve been staring at all game? Oh never mind, that should be easy, considering that all I can see when I look down is this: